Chase and Austin are fast asleep in bed together, a giant teddy bear between them, when Dr. Legrand Wolf enters in his loungewear. Sipping his morning coffee, he gazes lovingly down at the sleeping boys, thinking how cherubic they look. He puts down his mug, and gently tugs the blanket off the sleeping Austin. Delighted to find that both slept nude, Dr. Wolf begins to tenderly caress Austin’s small body, cupping his perfect butt and sliding his hands up and down Austin’s smooth skin.

Dr. Wolf crosses the room to the other side of the bed, his erection swaying in his flannel pants, to give Chase’s sleeping body the same attention. As Austin starts to awaken, Dr. Wolf turns his focus back on him as they gently kiss, while he strips down to just his T-shirt and socks.

As they continue to make out, Dr. Wolf slides his thick, cut cock into the tiny boy as Chase sleeps. The two are silent as Dr. Wolf begins to thrust in and out of the boy, his feet resting on the larger man’s thighs. Dr. Wolf watches Austin’s face as he bites his lip, trying not to make any kind of noise that might awaken Chase. Eventually the boy is too overwhelmed, and Dr. Wolf has to put one of his large hands over Austin’s mouth to silence him.

Austin is rock hard, but Dr. Wolf won’t stroke his dick quite yet. He carefully encircles the boy’s dick with his fingers, but never touches the head, forcing Austin to greater heights of prolonged pleasure. When he finally does slide his hand over the boy’s cockhead, he picks up a thick stream of pre-cum, which had been leaking freely ever since Austin first woke up.

Overcome by the sensations in both of their dicks, Dr. Wolf and Austin forget themselves just enough to accidentally awaken Chase.

“What’s going on?” he asks sleepily. Rubbing the sleep from his eyes, he sees his petite friend speared by a massive cock, and he immediately wants in on that action. Leaning over the teddy bear, he takes Austin’s pre-cumming dick into his mouth as Dr. Wolf continues fucking the boy, holding his leg in the air for better purchase.

Getting onto his knees, Dr. Wolf goes much deeper into the boy’s ass, earning Chase another squirt of pre in his mouth. As Dr. Wolf fucks Austin harder, he puts his hand on the back of Chase’s head and forces the young man deeper onto Austin’s dick as Austin moans, nearly overwhelmed by the sensations.

Now that Chase is wide awake and slurping on Austin’s dick, Dr. Wolf sees his opportunity to go balls deep in this young man, too. Moving to the other side of the bed, he spreads Chase’s ass open and deftly slides his spit-slicked, king-sized cock into him, grabbing Chase by the hips and pulling his ass deeper onto his dick. Austin watches in awe as Dr. Wolf uses the boy’s ass, making him moan so much that he forgets to keep sucking Austin.

The sight of these two naked, tiny boys keeps Dr. Wolf’s cock rock hard, though. “Keep sucking him off,” he orders Chase, who resumes his position on Austin’s cock. Pulling Austin upright, Dr. Wolf slips behind him, and slides his cum-drenched cock back into the boy’s ass. Wrapping his big arms around the boy’s chest, he instructs Austin to fuck himself. It isn’t long before they fall backwards, legs spread, so that Austin can ride the doctor’s dick, giving Chase a perfect view of the huge cock spreading his friend open as he sucks and strokes him.

Austin’s moans get louder and his breathing ragged as he begs Dr. Wolf to fuck him harder. As Dr. Wolf slams deep into him, Austin finally shoots a load all over his tummy and chest as Chase strokes him, his face scrunched up so cutely in unexpected, intense pleasure as he feels his dick spurt stream after stream. Finally satisfied, the three men snuggle closer on the bed naked, knowing it’s only a matter of time before all three of their cocks will be raging hard again. 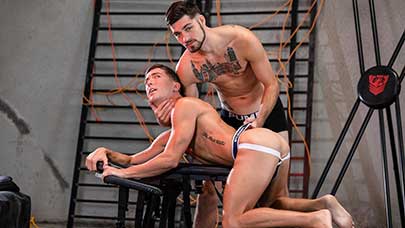 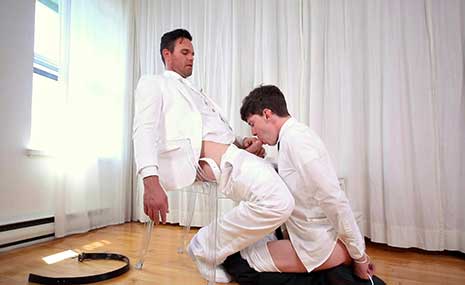