Cole Blue is an exceptional athlete. Not only is he gifted with speed, strength, and agility, he’s also clear headed and focused whenever a challenge comes his way. He’s a model for the other players and well on his way to varsity! Unfortunately, spots are limited and it takes more than just a winning attitude to make it on the team.

During one of his guided exercises with Coach Knox, he was surprised to see the handsome Principal Figata come into the weight room. It was very rare to have anyone from the administration show up during practices or workouts, especially given their busy schedules and demanding jobs. But the principal had taken a special interest in the athletic department… Cole in particular.

Coach Knox let Cole know that the older man was eyeing for a spot on the varsity team, but he’d have to be able to vouch for him from first-hand experience. Cole and Figata weren’t at all strangers to one another, having shared sweaty group action with a few of the other players. But Figata only got a sample of what Cole was capable of before. Now, he wanted to see just what a star athlete he could be.

Coach Knox was clear that Cole Blue was representing both the coach and the team, not just himself. Cole understood he was supposed to make a good impression, hiding excitement, nerves, and growing erection. As much as he wanted to make varsity, he couldn’t forget how good the principal’s mouth felt on his cock. And after the workout coach had put him through, he was ready to blow off some steam.

Principal Figata remarked how good Cole looked, feeling his chest and muscles as he complimented the coach’s regimine. It was true that Knox pushed all his athletes hard, but few took to it like Cole Blue.

The principal asked Cole to take off his shirt and pants, hoping to see more of how he’d been developing. Cole was a little embarrassed, feeling like a piece of meat being inspected by his two clothed superiors. They’d both seen him in various states of nakedness, but never together, and never in their team’s gym!

As Cole removed his sweatpants, his throbbing cock became too hard to hide. It practically broke through his tight, blue jockstrap. Figata was very pleased, feeling his smooth, athletic frame, urging him to remove the last bits of cover he had.

Cole Blue complied, stripping completely naked and standing for the two men to grope him. He didn’t really know how to respond, but he began to love the attention they gave him. The two muscle daddies dropped to their knees, impressed with Cole’s appearance and the massive cock that pushed forward from his hips. As if he wasn’t there to hear it, they talked about him, saying how well suited he was for the varsity team… and how much they loved his big meat.

“Make your coach proud,” he whispered, giving Cole the okay to begin breeding the older man.

With that, Cole Blue slid his veiny, throbbing cock deep into the velvety guts of his principal. Figata let out a moan from deep in his belly, clenching his teeth and gripping the bench as he felt every one of Cole’s nine inches pushed inside. Figata was no first-timer. He could take it. And, boy, did he love it. 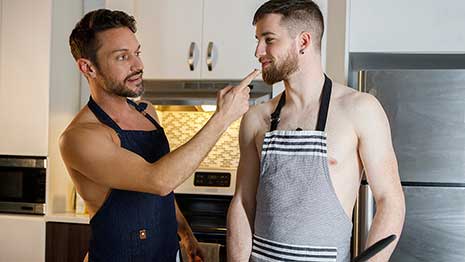 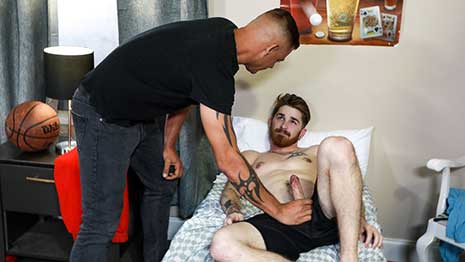